PORTRAIT OF A MASAI FAMILY IN KENYA

Peter Sasiet and his big family lives in the small village Mara Rianda in The Mara North Conservancy close to Karen Bllixen Camp.

32 year old Peter and his famly lives in a small house build mostly of clay and cow dung. He is married to Lorna, 28 years old, and they have

3 daughters named Seleyian 8 years old, who we named our support project after, Sein 6 years old and Sianto 3 years old. And in addition to this they also take care of a 12 year old girl from Lornas family. Peter is the oldest son out of 9 kids and Lorna has 4 brothers and one sister.

Peters parents lives in the same village, where they live in a house that Peter build and gave them, by saving up for many years. So they are living quite close to eachother and they are happy, every time they get time with their grand children, when Peter and Lorna are working. They have themselves a small boy lagging behind, Peters youngst brother, so they have enough to see to in their everyday life. They also have to look after their 60-70 pieces of cattle, which is done by Peter´s father. He starts out early every morning by sunrise and is back by sundown. With the Masai it is always the men, who tend to the cattle and the woman look after the children, coocking and actually they also build their houses.

Peters Grandmother still llives in the old Masai village which is located only a few kilometers away from Mara Rianda. 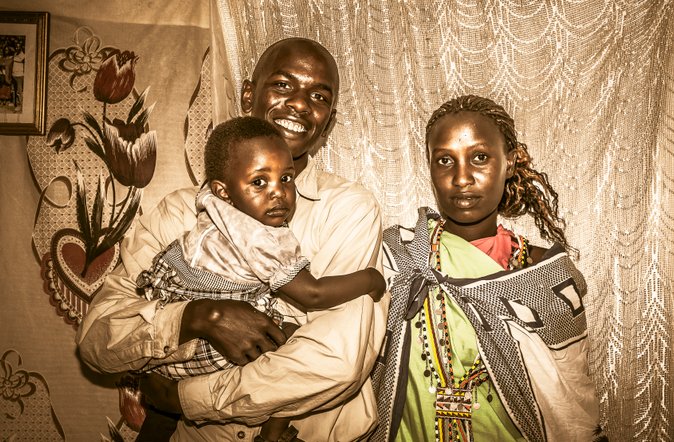 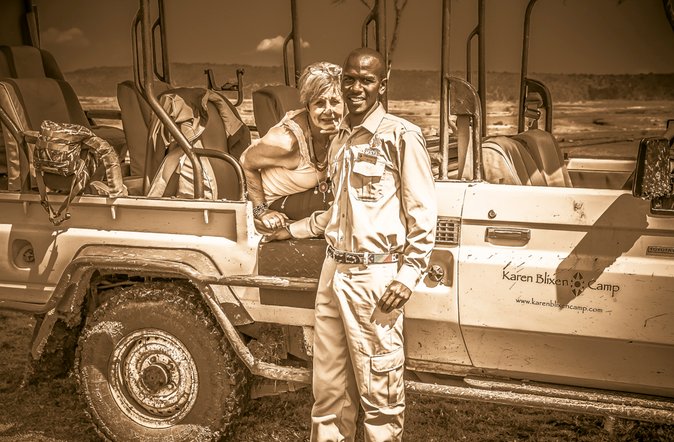 Peter is one of the lucky Masais, who has a job inside the tourist industry, which is the main income in all the Eastern  and Southern African countries. He works at Karen Blixen Camp and Africa Tours on a 50/50 arrangement, half the time in the camp and the other half taking guests around on safaries in Kenya for Africa Tours. He has been our personel guide and driver since we started our adventure in Kenya six years ago. Beside this job, he manages a small gas station in Mara Rianda (with one petrol stand). His biggest income comes from tip he gets from his guests. which is app. 5-10 USD pr. day pr. guest he services. So in periods outside the season, where the number of guests are limited, he has no income. In the peroid of 2020, where coronavirus was spreading around the world and tourism have decreased to almost nothing, the family had no income and every day was a fight for survival. In Kenya there is no possibility to get help of any kind, so it`s up to each family to cope for themselves. We have, when we had the possibillity, done what we could, to help and support Peter and his family through these tough times.

Peters wife, Lorna, has established a small busines selling veterinary medicine and non-alcoholic beverages. All together it helps the family to get enough money, so they can maintain a decent livelihood and pay school fees for their children.

Most of the Masais working in the tourist industry are men. They work in hotels, as drivers, rangers and safari guides. This is exactly why the corona situation in 2020 has been a serious time for all the Masais in Kenya and a lot of people have lost their jobs with catastrophic consequences as a result.

Peter and his family have been without income for more than 5 month and only in the beginning of September tourists have started slowly to come back to Kenya.

The Masai people have, just like many other indigenous people around the world, very strong family ties.

Beeing the oldest son in the family, Peter is looking after his parents, his kids and kids from other family members as well. The new description we have learned to know as "Society awareness" through the tough corona period, the Masai people have know since the birth of their culture. They are always there for eachother and the young ones always take care of their older. The word "egoism" meens much less in the Masai society than in the modern part of the world.

And fortunately it has been more important for the Masai people to make sure, that their children get an education if possible. This will, as we know, make them more prepared for the future. The childrens obtions comes before everything else and as the school system in Kenya keeps on improving, more and more parents will, if possible in any way, send their kids to school. This also applies to Peter and Lorne, who have their two oldest girls in school and the youngest in kindergarten.

Peter`s parents and grandmother, the picture to the right, all lives close to eachother and close to Peter and Lorna. So they all can enjoy eachothers company almost every day and they are all prepared to do whatever they can for eachother as well, when needed. 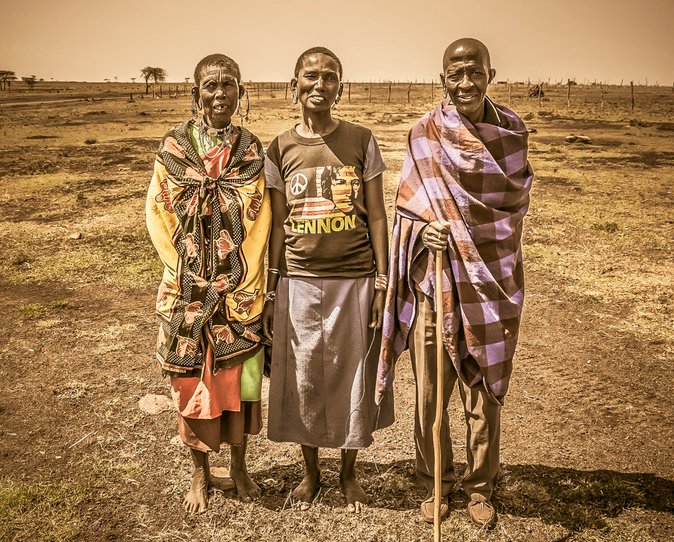 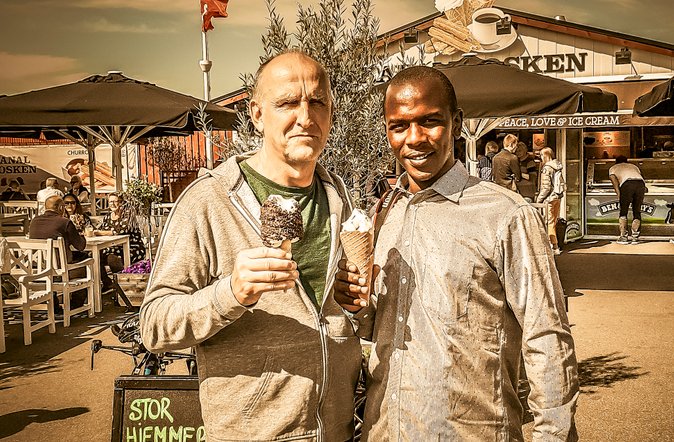 As one of the very few Masais, who is given the opportunity to travel outside Kenya, Peter came to see us in Denmark in 2019. He came together with the camp manager in Karen Blixen Camp, LIllian Kathambi, who also stayed at our place. Peter saved for a long time and we helped him splitting the flight ticket, so his journey could be a reality. That became the beginning of two fantastic weeks with a lot of good experiences around the country.

Channel cruise in Copenhagen, visit at Fredensborg Castle, Gilleleje, Hundested, Arresø, Ree Safaripark på Djursland and Tisvildeleje. And we also visited Rungstedlund, the childhood home of Karen Blixen, where we got a guided tour from our very skilled colleague, John Christensen.

Of course it can be quite difficult for a Masai like Peter, to understand the abundance of life necessities, that we, in the modern world, have access to.

It is so far from the world, he lives in. He had never been outside Kenya, never been in a airplane, so there were a lot of impressions that needed processing from the very first day.

Of course we made sure, that he had more than 400 pictures to bring home from his visit, so he could tell stories and show, what he had seen in Denmark.

It is was two very different worlds put up against eachother we witnessed i theese two weeks. A huge experience we will remember many years ahead.

If you are travelling in Tanzania or Kenya, you will most probably meet the tall and slim masai people. It is estimated, that around one million masai peoble lives in Eastafrica, from Nairobi in north to Dodoma in south. These normade people have for hundreds of years lived by hunting and raising cattle on the semi-arid savannah. This way of life have made them experts in adapting the, very often extreemly tough, terms on the savannah, where it always is very challenging to get food and water. To walk long distances for days to take goods to the market or get medical aid, is a part of their lives.

The Masai people raise their cattle on the savannah and they live in harmony with nature, as they have done in generations. The cattle are the focal point around their way of life and their diet, which primarily consists of meat, milk, cattle blood suplied with, whatever they can hunt and collect in the nature.

The Masai culture is a patriarchal culture and as such, older men has a specific status in the tribe, where virtues like raw strength and curage are beeing worshiped. In earlier times, when a young masai worrier, a moran, stepped in adulthood, he had put down a male lion.

This tradition is no longer permitted due to the big decrease in numbers of lions, but qualities like curage, raw strength and man's heart is still worshipped in great scale. One of the more, for us, famous rituals you can experience, are the young masai mens internal competition in jumping. A true display in raw strenght. The young Masai men are compeeting in jumping highest and showing strenght. The ritual is called Adumu and are just one of many proud traditions among the Masai people. 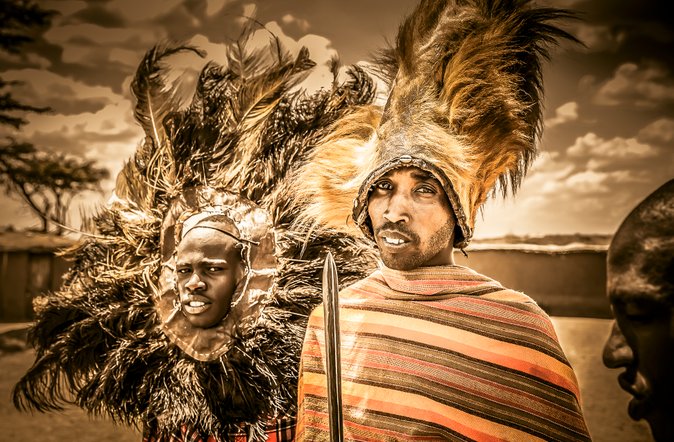 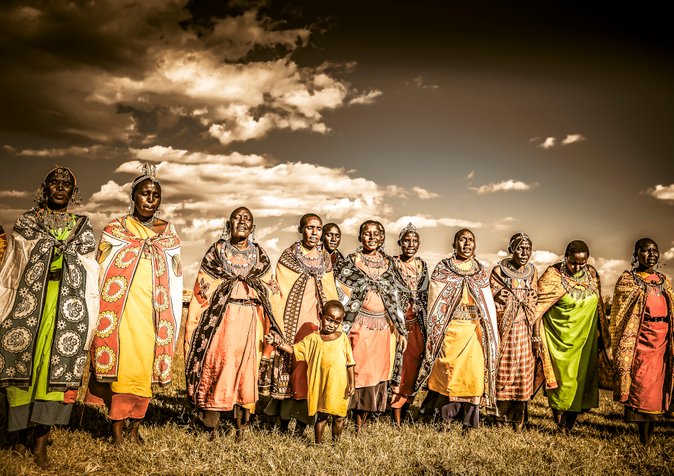 THE FUTURE OF THE MASAI PEOPLE IN OUR MODERN WORLD

The colorfull and iconic Masai people and their culture  are threatened by the the advent of the modern world and the climate changes, and it will have a huge impact on the people in Africa.

After many years of droughts caused by the climate change, the nature is changing and the basics and livelihood for the Masai are slowly dissapearing. The Masai are a noble and dignified people who, in spite of the huge pressure from the outside world, proudly have managed to maintain the traditionel way of living and cultural identity.

The Masai culture and barter economy is build on pastoralism, and their cattle are the cornerstone in their lives and if more and more draughts are killing the cattle, the Masai will loose their identity and their way of life, as we know it today, will dissapear. So they really do need help from the modern industriel world in order to consist - they will not be able to make it by themselves.

The Masai people have suffered a lot for many years due to the consequences of greed from powerfull people and companies, who wanted to own more and more land. A trend, which unfurtunately is seen many places around the world. And now in addition to that, the climate changes have increased the pressure on the Masai. If you ask the Masai people themselves, some of them don`t believe in a future, like they used to know it.

Fortunately we are a lot of people around the world, hoping for the survival of the Masai culture and a lot of actions have been taken, with the purpose of helping with education, farming and wildlife preservation. Additionally many helping projects are focusing on clean drinking water, which also is a big need. New water tanks and new drilings are established around the country.

The world will be a much poorer place to live in, if the Masai people and their proud culture dissapears.